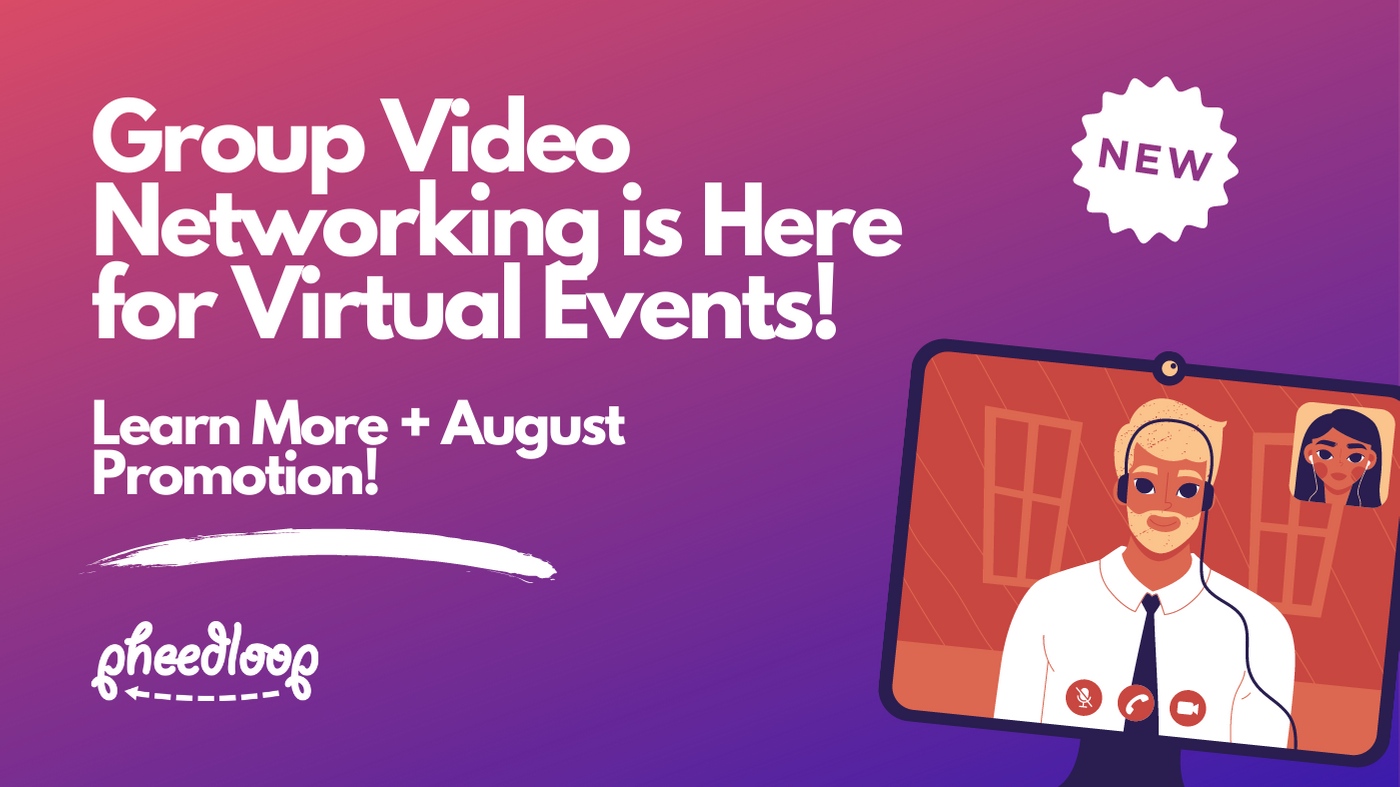 We feel we say this just about every week, but it’s time to announce another highly anticipated feature for you all which we’ve already seen be a game changer for so many events using it in beta - group video networking!

We know this is the one of the first things on everyone’s minds, so before diving into the details of the feature set, know that 5x5 group networking (5 groups with up to 5 real-time participants) is included for free in all virtual networking modules and already live. If you are a new customer coming onboard in August, we are giving away a free upgraded virtual event networking credit, for 25x25 group networking!

If you are an existing customer and want to upgrade, you can do so right from your dashboard.

How Does it Work?

As you’ve probably seen over the last few months, our in-built video meeting system called PheedLoop Meet is continuously evolving. What started with 1-1 video networking expanded into many more things, most recently, exhibitor video booths (which have also been incredible to experience!).

With the group networking update, we’ve adapted PheedLoop Meet in a few ways. Under your virtual event’s networking section, you can now create groups (either you, as the event admin, or even allow you attendees to) on any topic you like, and allow attendees to join in. As soon as there’s even one attendee in the group, the group “goes live” and moves into a state which encourages more people to join in.

Attendees in a group can chat via text (including the ability to review previous chat messages), or join in via audio/video with up to 25 other attendees. 16 video feeds can be running at the same time, and screens can also be shared to create a super immersive and collaborative experience.

Just like every other feature in PheedLoop’s system, there are so many ways to use group networking. It’s always exciting and surprising for us to see the interesting ways in which event managers use the technology we build. Some common use cases we’ve seen already:

Breakout Rooms - Breakout rooms are something everyone’s trying to get right, and everyone’s idea of what a good breakout format looks like is different. Group networking allows you to create rooms and direct attendees to them if you’d like, say post-session, to continue the conversation around various sub-topics.

Casual Conversations - One of the best things about live events are the serendipitous moments where attendees bump into each other, maybe in line for some food, after a session, or just in the hallway. Creating group networking areas centered around exciting themes will attract attendees and invite them into casual conversations, with the option to branch out into private conversations and make new connections.

Sponsor Opportunities - Looking for another way to give your sponsors some air time? Creating a public networking group for them where people can walk in and ask them questions about your industry, their products/services, and more could be a great way to draw more exposure for sponsors. Similar to live video at exhibitor booths in some ways, so be sure to consider that as well for a more sales-focused option for sponsors and exhibitors.

Speaker AMA/Q&A - Sometimes people can’t get enough of your most popular speakers, and your polished sessions don’t allow for enough time for everyone to get time with them. Well, creating AMA (Ask Me Anything) rooms is an exciting way for casual conversations with your speakers. Invite attendees after your session to join the speaker in a live group networking room to continue the conversation.

We’re extremely excited about this new addition to PheedLoop’s suite of virtual events tools. We truly believe powerful video experiences, more than anything else, play a major role in successful virtual events, so you can expect many new features to help groups and individuals connect with each other, face to face. 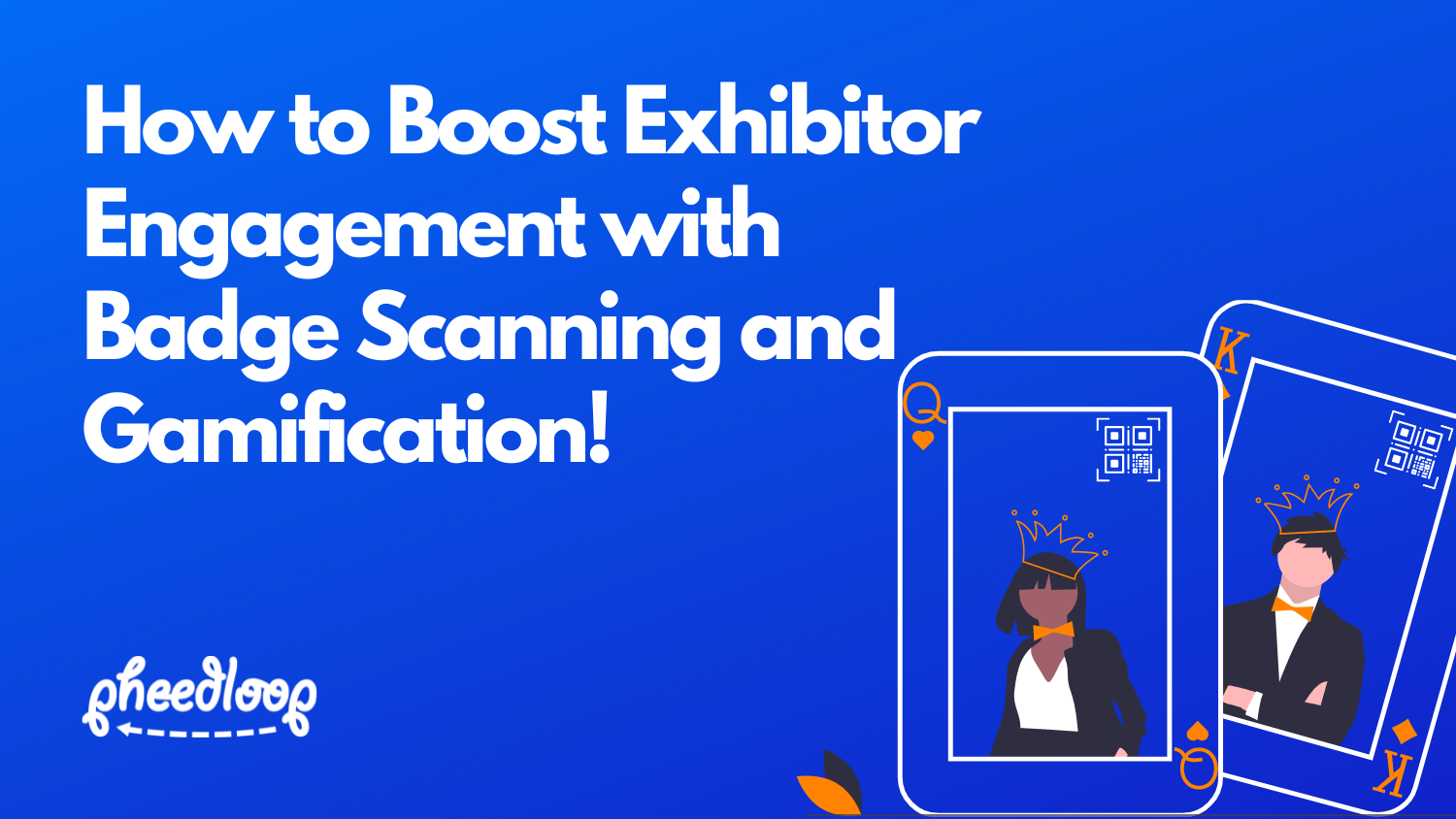 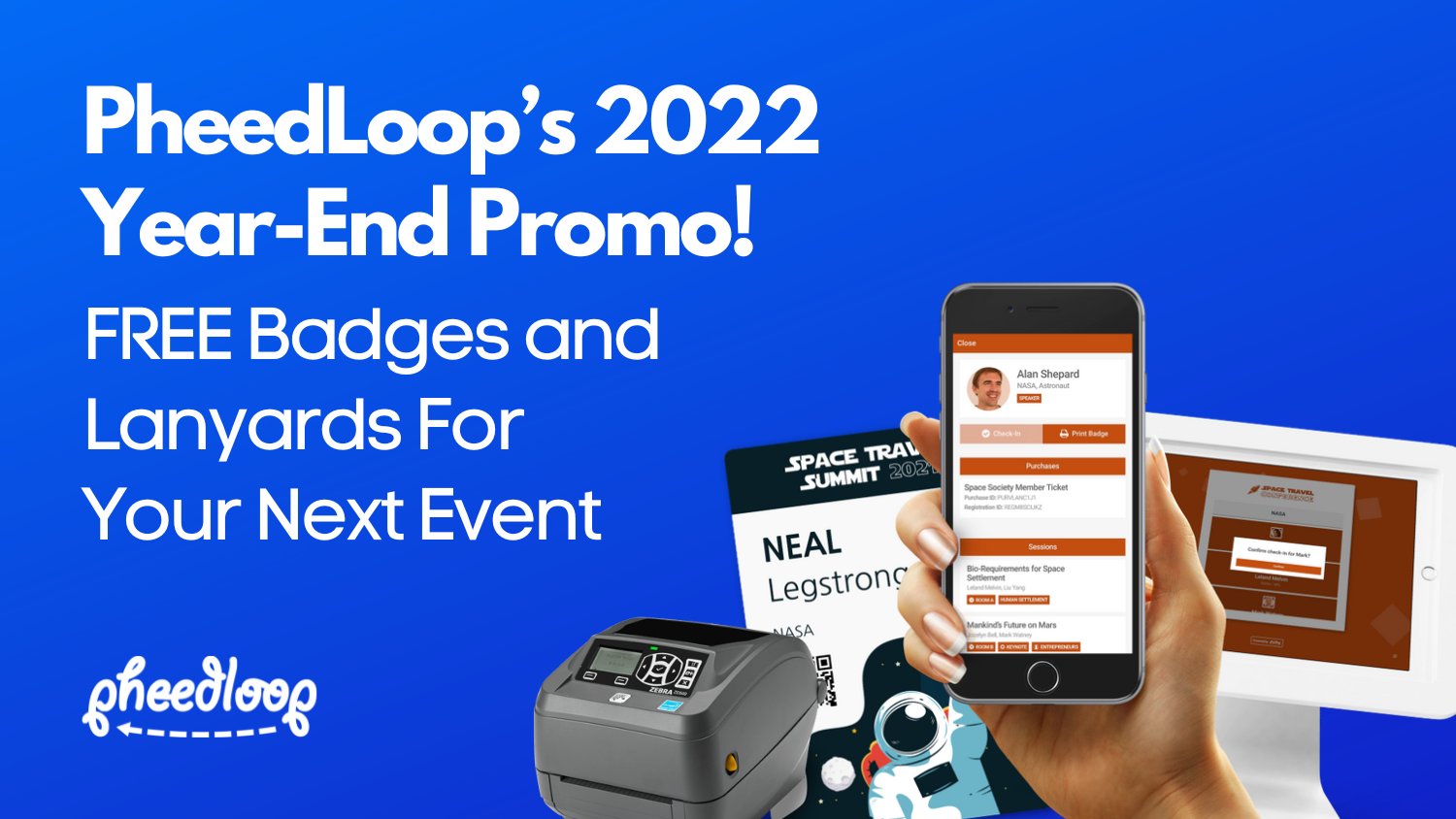 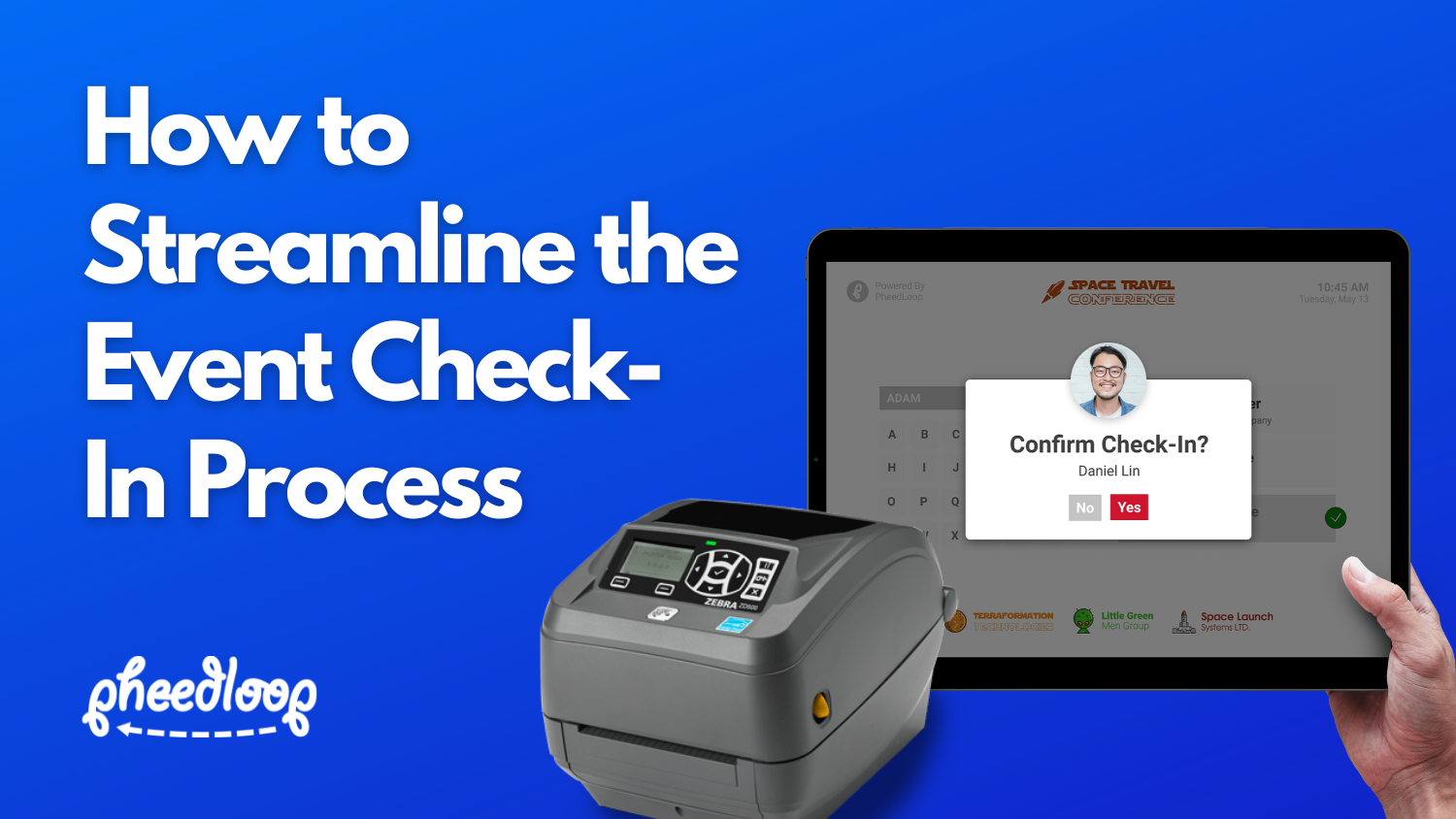 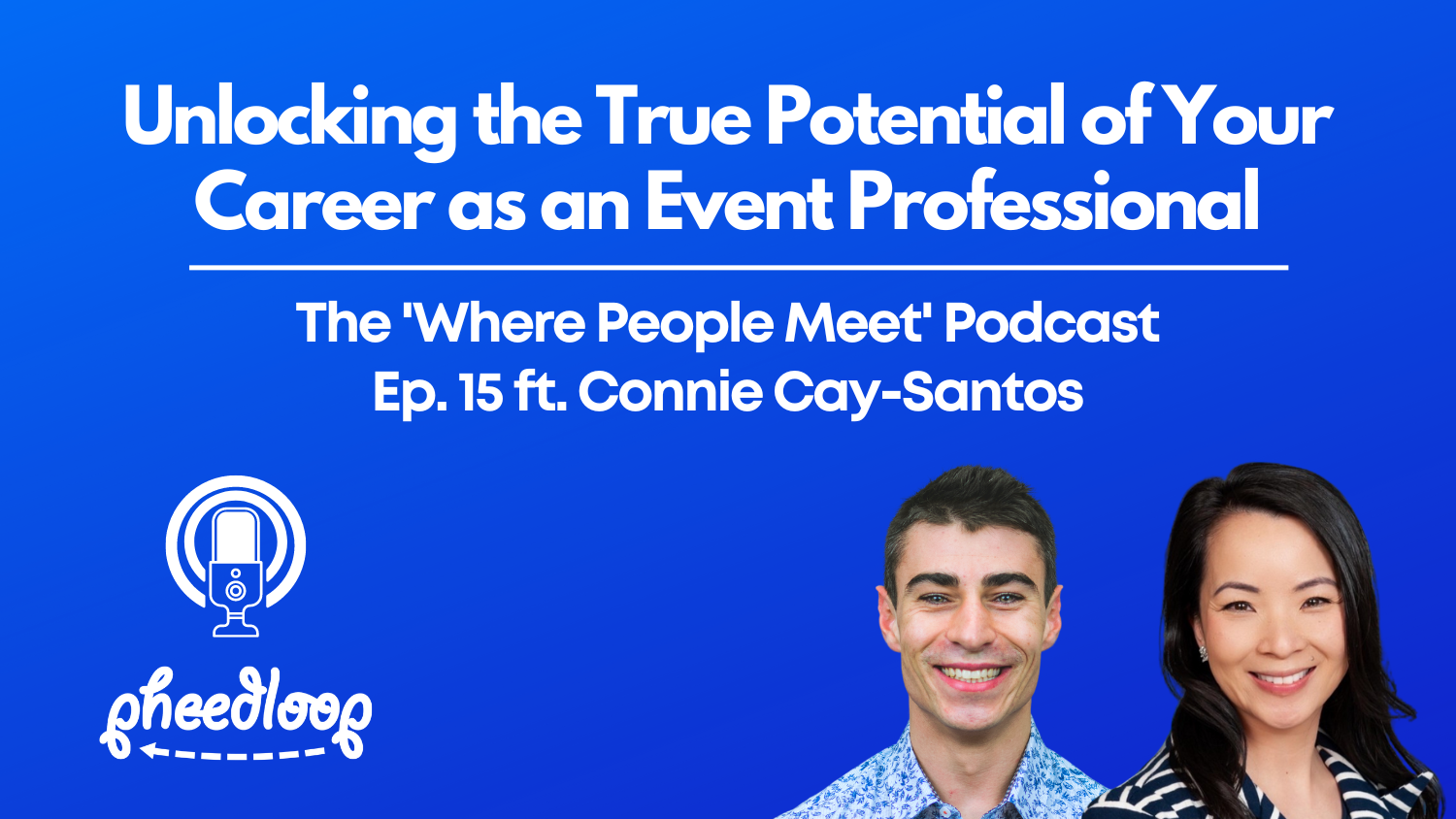 PheedLoop is an all-in-one event management platform for live, virtual and hybrid events. Our platform powers events for associations, corporations, agencies, educational institutions and governments worldwide including Shopify, Government of Canada, American Society of Mechanical Engineers, IBM and more. We commit ourselves to being a highly product focused company, and are dedicated to releasing new features and product updates every week since our founding in 2015. We post regular updates like this one to our blog.

If you'd like pricing or demo information, or would like to book a meeting with one of our representatives, please visit this link.

Get event tips, product updates and more from PheedLoop

How to Boost Exhibitor Engagement with Badge Scanning and Gamification
PheedLoop’s 2022 Year-End Promo - FREE Badges and Lanyards For Your Next Event!
How to Streamline the Event Check-In Process
Unlocking the True Potential of Your Career as an Event Professional ft. Connie Cay-Santos
Everything You Need to Know About Sponsorship Packages

Looking for more information or
want to get started? 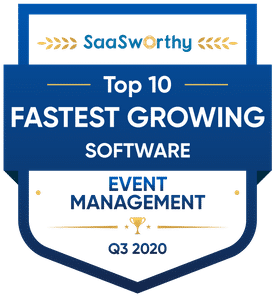